Over the year (s) certain alien species seem to have vanished without a trace, namely seeing according to ancient star map (s), their home solar system (s) move away from our own solar system. With the movement of solar system measurements then changing, and ensuring the replacement by seeing other solar system (s) gaining on our own solar area. Described as technology, planet (s) were once thought by certainty to fly as extra-advanced technology, thus enabling a ‘god’ and/or ‘deity’ to protect us as a product or commodity against alien threat (of inter-terrestrial nature).

Through different centuries, people began to report seeing different species, while records can be rarely read before the 1200’s due to little profile, and little ability of translation in ancient English, Welsh, or Scottish Hebrew writings in total, it seem (s) since around the early 1200’s (11th Century), that mainly nine species have been located in underground bases (s) around this earth (planet).
​
Interesting information gained by astrologer (s) is that planet (s) after the species reported overall population (s) irradicated by ‘god’, tended to move away, which saw a replacement solar system fill the space leaving the area non-void of threat to our species at all. As solar system measurement (s) at all space intelligence agencies constantly change, it seems currently certain solar system (s) are moving closer, and other (s) are gradually moving away from our universal special zone (entirely).

Barnard’s star (The Nordics), these space travelers are known to be up to 16 feet in height, currently using various bases across earth to attempt to expand their soil margins across space. Flying saucers are used across earth by record (s) mainly for transporting militarized alien staff and observation (satellites).
​
a Centauri A (the Greylings), these space travelers originally came to earth by public record over 900 years ago, only known to be currently a small population worldwide in underground bases, these aliens (inter-terrestrial) grow to about 9 feet at most. They have been known to be the most commonly sighted alien flying saucer (s) for over a century by all tracked data (by military signal bases), meaning that a vast proportion of these space invaders alien satellites and flying saucers have been spotted by human people in the last century.

a Centauri B (the Greys), these space travelers are accurately the most described space travelers in press and among conspiracy channels, only about our height in total, with similar bodies, but differences in facial and eye line appearances. Sightings from these space invaders vary with their flying saucers (UFO), sometimes they are very active in certain part (s) of the world, displaying warning (s) to citizen (s), however, tracked data suggest (s) they do not display the most out of all tracked species.

Proxima Centauri (the Tall Pinks), only known to come forward recently by public records, however are very fast at running, and highly dangerous, very big in size (15 to 19 feet each), they fight very violently, these inter-terrestrial aliens are only ever in very small population stock across our world. Barely any tracked saucer (s) by this species exist through record (s) at all across the world, meaning that it is highly likely that they do not use ufology as commonly as other species.

​Barnard’s star (The Nordics), these space travelers are known to be up to 16 feet in height, currently using various bases across earth to attempt to expand their soil margins across space. Known to have thin hip (s), these alien (s) are usually white, grey, pink or light brown (by record (s)), record (s) indicate that these inter-terrestrial alien (s) psychically use brute force against human (s) at United Kingdom base (s) to secure future deal (s) for land.
​
a Centauri A (the Greylings), these space travelers originally came to earth by public record over 900 years ago, only known to be currently a small population worldwide in underground bases, these aliens (inter-terrestrial) grow to about 9 feet at most. These alien (s) are the most similar in description to images broadcasted around the world about alien (s), they are very aggressive, and constantly plan to kill or injure civilians across the entire world. Record (s) show that they have visited and previously negotiated huge land deal (s) with Winfrith terror network (Dorset, UK), and that other deal (s) have been secured by their national alliance (s) with other terror networks abroad.

a Centauri B (the Greys), these space travelers are accurately the most described space travelers in press and among conspiracy channels, only about our height in total, with similar bodies, but differences in facial and eye line appearances. Known previously in the nineteenth century and twentieth century to have done deal (s) by record with Winfrith terror network (federal Dorset Police), these aliens (inter-terrestrial) recently suffered heavy losses, after extra-advanced technology retaliated as they attacked for expansion.

Proxima Centauri (the Tall Pinks), only known to come forward recently by public records, however are very fast at running, and highly dangerous, very big in size (15 to 19 feet each), they fight very violently, these inter-terrestrial aliens are only ever in very small population stock across our world. Known by Welsh record (s) to have struck deal (s) in Wales (Cardiff & Swansea), these alien (s) (inter-terrestrial (s)) cannot seem to expand, as highly powerful extra-advanced technology attacks them in retaliation of their ongoing attack (s) to expand in soil margin (s) on earth.

This sighting of greyling inter-terrestrial alien (s), has been fairly common to Mr Stan Romanek, while federal police (UK) took over a year to confirm that these were Greyling (s) (due to poor quality footage), these inter-terrestrial alien (s) have been sighted in America, and Canada by thousand (s) of people through report (s) regularly. Report (s) of sighting (s) of these inter-terrestrial alien (s) in the United Kingdom have been less common, however, many people in the UK (united Kingdom) have reported sensing these particular alien (s) near to their home (s).
The description upon sight of inter-terrestrial alien (s) from Alpha-Centauri was almost identical to human people. The differences are notable, meaning that you can tell that you are dealing with a species off our world when being visited by this species. In essence this species from Alpha-Centauri only has minor visible differences in appearance from our own species of humans.
​
From counting fingers and thumbs on these particular aliens of inter-terrestrial origin, they have two hands with very similar fingers and thumbs, and they have the exact number of digits per hand. Their feet are slightly smaller in general and partly flatter, however the number of toes in description is identical, although slightly stubbier.

In height humans are slightly taller overall across our world on average, than all inter-terrestrial aliens measured (surveys across the world) from Alpha-Centauri, however they were all similar in shape and height, skin tones throughout the breeds of species from presumably different regions of their own world, showed different skin tones to our own species with slightly darker tones of skin on average, and in one case far whiter (albino) tones.
Alderney (channel islands) beach
​
In the last 10 year (s) many record (s) have surfaced in Alderney (Channel Isle (s)) about alien (s) of unknown origin on a particular beach on Alderney's North East (western part of north east coast), these alien (s) were always described as ten different ethnics origin (s) in total. The species was always known by record as the greyling (s) from A Centauri a (Alpha), these alien (s) had a base located with a sea entrance underneath Alderney isle until recently, the base was entered by the sea bed, with plastic sheeting board (s) which opened on the sea floor into a mass locking system for saucers (sub merged and flying saucer (s)) to enter. The base is still known to exist, and has been known by record to exist for over one hundred year (s), and it as a base has been known to be used by many species.

Other description of alien (s) 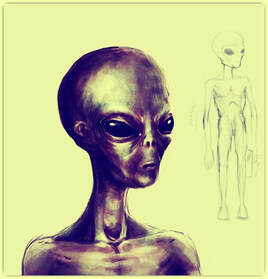 The drawing above is not a photo shot at all, it is a description of someone (s) imagination of a grey alien, however the main two feature (s) by record, which are incorrect are the ear (s), and the eye (s), Grey alien (s) are known to have similar size eye (s) to our species with slightly more coloring than our own eye (s), grey alien ear (s) are known to be slightly (quite larger) larger than our own (human species averagely) ear (s) (public record (s) UK). Similar to a real life alien is the color and context of the skin in this particular drawing, the mouth and nose is also similar, however, grey alien noses are usually quite pointed (record (s) Cardiff, Wales).
In all cases of other species visiting our United Nation (UN) zone, all inter-terrestrial alien (s) individually, and as species. With the main four species documented across public record (s), within access files in the United Kingdom (UK), all inter-terrestrial alien (s) have two feet, two hand (s), almost identical type (s) (sector (s) of internal part (s) (accept tall pink data is bleak or limited in total amount), two eye (s), a singular mouth, two ear (s), one singular nose (each), hair in similar body part (s), and in most cases all four expanding alien species have very similar bone structure.

This signal (s) creation across the universal (galaxy area (galaxy is incomplete description of a zone by science data)) planetary system in total amount, meaning that commodifies across space are housed on world (s) as valued unit (s) (combined singular unit (s) in access). Therefore this ensure (s) we are a species who has external value, from our own belief, this mean (s) we are a breeding program, as are other species across the universal planetary system (s).
​Data obtained is sometimes from international public record (s), we obtain data from various sources, namely archives of both modern and historical content. All data we read is able to be disqualified from national, international and local archive due to internal cover up (s) across every area of the world and United Kingdom