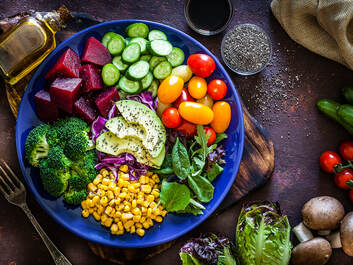 Nutrient (s) are entirely (totally) essential, and as a species, while we do prefer to avoid overload (s) of fruit, and vegetables, replacing those ingredient (s) with meat (s), from either sea meat (s), or land farm meat (s), and frequently dairy product (s) as well, are needed in order to ensure a human (s) (and all land animal (s), and mammal (s) (almost all through verified research)) digestive system remain (s) healthy.

​The issues faced by living an unhealthy diet lifestyle are severe, and will undoubtfully shorten every person taking this pathway (s) in diet entire life severely, common death (s) reported throughout the world, are due to cancer (s), which are proven to be caused from dieter (s) eating too many meat (s), or too much dairy produce. Often person (s) who fail to eat fruit (s), make up for their sugar (s) by consuming product (s) which contain artificial sugar (s), such as desert (s), and soft drink (s), this entire process, causes severe complication (s) to the bowel, and is known to be a major cause of bowel related syndromes globally (Oxford research notes). ​

Eating vegetables, either fried, steamed, or part boiled, is an essential process, balancing your vegetable intake with different colors of vegetables is essential, as vegetables of all color (s) contain varying key essential nutrient (s), for example, green vegetables are known as high in natural amino acid (s), which help supply high qualities of blood around the body, preventing the risk of heart attack (s), and strokes.

By eating a balance in color of vegetables, it allow (s) a consumer to engage in eating an entirely healthy diet in consumption of intake orally, however, if various colors of vegetables are not to a consumer (s) desire, it is advised to try and eat as many vegetables as possible, making sure if you are almost entirely only eating vegetables, that you either eat plenty of fruit (for sugar (s)), or sugary desert (s), as balance issue (s) will be indefinitely caused if you are not consuming enough sugar into your blood supply.  ​

​Eating fruit (s), provides the body with the best version, and ability of supplying vital (natural) essential sugar (s) (nutrient (s)) to a consumer (s) body. Every consumer that eat (s) a balance in color (s) of vegetables is known through all official Oxford University research to live a fuller, and longer life, seeing many cancer (s) cured through person (s) targeting heavy fruit based diet (s) through sick period (s) of ill health.

Balancing fruit (s) when intaking vast amount (s) is important, as sometimes the body can become addicted to the feeling of intaking fruit (s), and overload (s) while known to rarely kill, can cause huge withdrawal symptom (s) when ingesting meat (s), and dairy produce. Person (s) (consumer (s)) who give up meat (s) and dairy, are known when over loading on fruit, to not be able to entirely return to a meat based diet entirely on a semi-permanent basis, as the digestive system reject (s) the notion of digesting meat (s), and dairy produce after heavy over loading.

Eating (digesting) fruit, and vegetables is known to aid depression, and prevent many illnesses with gut (s), and mainly person (s) (consumer (s)) liver (s). It also improves most bowel syndromes severely, seeing many person (s) cured of severe bowel issues almost immediately, while doctor (s) around the globe often subscribe, or prescribe pharma-tablet (s) to cure bowel syndromes, the main approach must be to improve diet regimes, with both vegetables, and fruit, which through all research has proven to at least severely improve all bowel syndromes immediately.

Water is known when cleansed, or fresh from rain drop (s) to be entirely healthy for you, and contain (s) vital supplement (s) of vitamin criteria (s) in nutrient (s). Most University research, advises drinking more than two litres a day, and not consuming water in too many juice concentrates, as artificial chemical (s), and sweetener (s) cause liver damage, and also dehydrate person (s) (consumer (s)) kidney (s) entirely, therefore through all research on occasion leading to kidney failure, and on occasion gastric disorder (s).

In water, are cell (s) of pure nutrient (s), which when ingested, create cell (s) within consumer (s) bodies, to move in a method of calmness, suggesting through all international research by Universities worldwide under analysis, to ingest water regularly is essential, and far better than consistently drinking freshly squeezed fruit drink (s).

Sexual health is about practicing love, seeing many person (s) practice convenience (psychopath (s)), rather than love, due to being closet gay person (s) (psychopath (s)), causing in themselves issues to other (s) in their personal behaviour, because they do not practice love, as it is completely seen by physical research that practicing love improves legal behaviour entirely, click the button beneath to read more.  ​
CLICK HERE