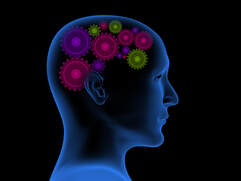 Artificial intelligence is known to be the source of hyper complex code instruction (s) sent into our mind (s) by creation (in algorithm format), ensuring balance, vision, thought process, and hearing abilities universally among all human (s).

Thought processes are complex pattern (s) of algorithm (s), set out by programmed code (s) of context, these pattern (s) allow person (s) to ideally think within varying set (s) of parameter (s). All thought processes are controlled, there are limit (s) to every outcome, this is proven in science thousands of time (s) every year, as people (person (s)) cannot achieve everything that they could possibly imagine.

Imagination is part of a thought process, visual hallucinations (s) are able to be obtained by false belief, this proves through severe complex algorithm (s) that our species is being misled, or led into certain direction (s), as we receive from our imagination enjoyment, and also commonly a false idea about reality.

Thought processes prevent our species from receiving the idea that something above, or beyond of us is in control of varying outcome (s), which encourages our breed (s) to behave entirely separate to each other, and it prevent (s) the idea that we as a species globally, or internally should be entirely civil, and/or peaceful. The long hand complex algorithm code, work (s) on our imagination, so that we perceive ourselves as simple being (s), without reason to exist.

Enjoyment in life, is priority to almost all person (s) worldwide, programming allow (s) our feeling (s) to receive great feeling (s) from enjoyment, this encourages us as women to let our hair down, and as men to take off our shoes (described as a figure of speech), and it allow (s) us to seek pleasure with other (s) (loved one (s) & friend (s)). By coding we receive it is clear in scientific study that we are being encouraged to enjoy ourselves, with most person (s) receiving coding that makes person (s) spend money for pleasure, or at least engage in activities, and/or hobbies. ​

All thought processes are entirely coded, complex algorithm (s) define who a person is within themselves, variable thought processes happen between male and females, encouraging males to talk in deeper tones, and females to talk in higher sound (s). With male (s) wearing clothes which define them as gay or straight males, and then female (s) who frequently by their code (s) wear more prevalent clothing styles worldwide, which is commonly seen as straight females having less provocative clothing, and gay females wearing more revealing features in clothing dress more often.

With males generally opting for shorter hair, and females commonly opting for longer hair, the variance (s) in each individual sex (genome) does not define a person entirely, however, programming ensures that each person chooses a pathway for themselves in their own belief (thought process), as a way of defining themselves as male, and/or female individual (s).

The same code (s) which are diversely programmed upon us all, reverse in many characteristics with females, seeing gay females have certain key singular complex algorithm codes in their behavior, and again with straight women having slightly different coding in behavioral coding which as a genome (or sex by description) see (s) similar pattern (s) emerge upon themselves, and with bi-loving females see (s) part (s) of each genome (s) (sexes (straight and gay)) coding mix, as bi-lover (s) are known as great all rounder (s) in social disciplines.   ​

In all human (s) person (s) people (scientist (s)) can trace social dynamic pattern (s) across the entire world, seeing person (s) from around the world act in entire pattern (s) as ethnic person (s), and/or race (s) of person (s). This will see certain popular conversation (s) (ice breaker (s)) used by everybody worldwide, meaning that the level of intellect across the world is entirely limited.

Coding control (s) the outcomes of social dynamic (s), as social classes (gay person (s) classes) tend to enjoy hanging out, socializing, and/or engaging in discussion with other person (s) more so than person (s) who are bi-lover (s), or particularly straight person (s). This ensures person (s) who are without fulfillment can at least find enhanced pleasure in other (s), allowing for variable set pattern (s) to emerge constantly in all social class places of discussion, with variances usually found upon the place they meet, meaning that if a social class group meet (s) at a place of work (sector place), they act entirely reserved, when in comparison to meeting in a place of lifestyle, such as a hotel, where they either become kind, and/or toxic in character.

These pattern (s) are very clear, and are seen throughout all cultures across the entire world, with very few variances at all. Universities have studied thought process for year (s), and all to often find fairly few variances between cultures, and social dynamics across every ethnicity they research and study. Lifestyle can also be seen among straight person (s) to work in coded outcomes across the entire world, with straight person (s) generally being more reclusive in nature, and in themselves living far healthier lives as people.